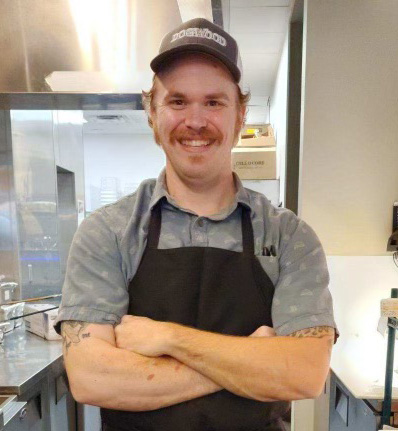 Coming from a family of hosts, Chef Andy learned at a young age the importance of showing up with delicious food in tow. Surrounded by southern dishes he started thinking of ways to put his own spin on traditional dishes to showcase his love of Indian and Asian food.

When not managing the line at Dogwood Andy can be found out in the wild climbing rocks and causing general mayhem.

We are so happy to have Andy in the family as far back as 2015 and look forward to a stellar future! Growing up in small town PA Michele never thought about the strange lands below the Mason-Dixon line, but as fate would have it she was accepted to UNC-Charlotte and this northern influenced southern city became her home.

Learning the volume game at The Olive Garden, the small, chef-driven style of boutique dining at Ann Breeze's Palatable Pleasures and completing a long stint at 300 East Michele became completely immersed in hospitality. But, by far the most fortuitous move of all was being hired to be on the opening team at Dogwood where all the lessons of the past coalesced into a fun, challenging, love-filled present and future adventures.

Michele helps run the show at Dogwood now and is curating one of the most thoughtful wine lists in South Park. Restaurants are an environment that Jacob can't and has no desire to pry himself away from, as they provide a medium for him to interact with his two greatest passions: food and people. Raised by a single mom, Kelly, Jacob's favorite time to spend with her was in the kitchen. Early on, Jacob came to realize that he felt most at peace while cooking. His fascination with food and flavors drove him to attending culinary school at Johnson and & Wales University and starting to work in kitchens. His passion for making people feel special led him out of the kitchen and into the front of house.

If you work with Jacob, he is going to cook for you. Both fiercely passionate and an easygoing jokester, Jacob brings a positive energy to the restaurant. Jacob started at Dressler's Metro as a server March 25 of 2021 after being scouted by Brendan Schaefer. Within a few months he was bartending, key managing, and also working at Fin and Fino. These days, when Jacob isn't managing at Dogwood, he can be found spending time with his incredible partner Deedee and his perfect fur babies Jodeci and Jester, going to as many concerts as possible, or making fermented hot sauce.

Winter has been kicking around these parts for a while. She started at Dogwood as a server and was such a rockstar Brian invited her behind the bar. More rockstar moves behind the bar led to more opportunities for Winter. She went on a short walk-about but found her way back to us and is now running the bar program at Dogwood.

When not slinging amazing cocktails, she can be found hanging with her gentleman Travis and their kitty Ash, crushing video games and ordering DoorDash. (She might have a problem.)